Those who were following me last year may remember how I loved Lars Keplar’s The Sandman so I was eager to read the next in the series Stalker. When I was offered the chance to be involved in this blog tour I knew I had to squeal “yes please”. Thanks @AAknopf for a free advanced copy of the book to review. 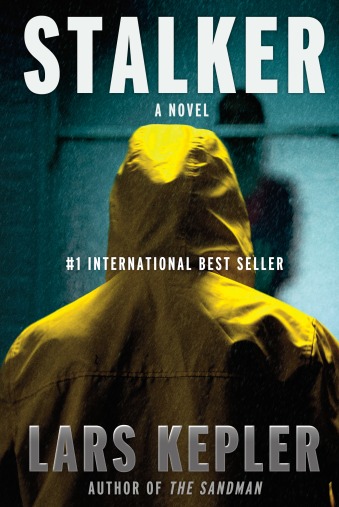 The internationally bestselling authors of The Sandman and The Hypnotist return with a
terrifying new thriller:

Detective Joona Linna–recently returned from compassionate
leave–reunites with hypnotist Erik Maria Bark in a search for a seemingly unassailable
sadistic killer.The Swedish National Crime Unit receives a video of a young woman in her home, clearly unaware that she’s being watched. Soon after the tape is received, the woman’s body is found horrifically mutilated. With the arrival of the next, similar video, the police understand that the killer is toying with them, warning of a new victim, knowing there’s nothing they can do. Detective Margot Silverman is put in charge of the investigation, and soon asks Detective Joona Linna for help. Linna, in turn, recruits Erik Maria Bark, the hypnotist and expert in trauma, with whom Linna’s worked before. Bark is leery of forcing people to give up their secrets. But this time, Bark is the one hiding things. Years before, he had put a man away for an eerily similar crime, and now he’s beginning to think that an innocent man may be behind bars–and a serial killer still on the loose. . .

Lars Keplar have a unique style which I love and their books are always dark common in the Scandinavian noir genre. This is no exception. The murders are graphic and tap into the fear of being watched while living your life or getting dressed. I was always paranoid about the curtains being open at night but now I am even more cautious.

It follows on from The Sandman and though this book could be read as a standalone the complex lives and relationships between the characters may mean you may miss some of the depth of the story and the motivation of their actions.  Joona Linna is assumed dead allowing another detective Margot Silverman to take on his role to investigate. I liked her as a protagonist and think she could have carried the story alone. Heavily pregnant she is determined to solve the case before maternity leave so reluctantly accepts help when Joona reappears along with Erik Bark from the book The Hypnotist.

I was drawn in with the intensity of the first murder and the urgency to catch the killer before he strikes again. The fast pace at the beginning made me eager to know who the murderer was and why but there was a lull in the middle and I began to lose interest. If I was not reviewing I may have put it to one side but I am glad I didn’t as the pace quickened towards a satisfying conclusion. With the unexpected twists and turns as it delves into the world of drugs and human psyche, Stalker is a good read but it lacked the connection for the characters I have felt with the previous books.

Yes despite my misgivings Lars Keplar are strong talented authors and Stalker is still a high quality, enjoyable Nordic thriller.

LARS KEPLER is the pseudonym of the critically acclaimed husband and wife team Alexandra Coelho Ahndoril and Alexander Ahndoril. Their number one internationally bestselling Joona Linna series has sold more than twelve million copies in forty languages. The Ahndorils were both established writers before they adopted the pen name Lars Kepler and have each published several acclaimed novels. They live in Stockholm, Sweden. Translated by Neil Smith.

Have a good weekend and happy reading!

It is a long time since I have visited the Scandinavian Noir books by Lars Kepler so I excited to have the opportunity to read an ARC for their latest thriller featuring Joona Linna. Thank you for Knopf Doubleday Publishing Group in exchange for an honest review. 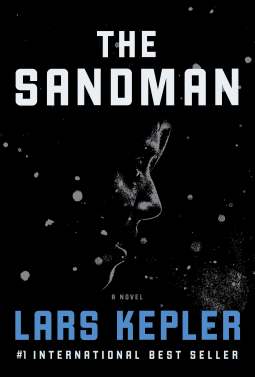 The #1 internationally best-selling thriller from the author of The Hypnotist tells the chilling story of a manipulative serial killer and the two brilliant police agents who must try to beat him at his own game.

Late one night, outside Stockholm, Mikael Kohler-Frost is found wandering. Thirteen years earlier, he went missing along with his younger sister. They were long thought to have been victims of Sweden’s most notorious serial killer, Jurek Walter, now serving a life sentence in a maximum security psychiatric hospital. Now Mikael tells the police that his sister is still alive and being held by someone he knows only as the Sandman. Years ago, Detective Inspector Joona Linna made an excruciating personal sacrifice to ensure Jurek’s capture. He is keenly aware of what this killer is capable of, and now he is certain that Jurek has an accomplice. He knows that any chance of rescuing Mikael’s sister depends on getting Jurek to talk, and that the only agent capable of this is Inspector Saga Bauer, a twenty-seven-year-old prodigy. She will have to go under deep cover in the psychiatric ward where Jurek is imprisoned, and she will have to find a way to get to the psychopath before it’s too late–and before he gets inside her head

The action starts on the first page and the thrill does not stop until you reach the end. It took me a while to adapt to the use of present tense but along with the short chapters, I found it added to the urgency of the plot as the detectives race against the clock to find Mikael’s sister. The tension increases further with the dark, twisted world of the psychiatric ward Saga finds herself in. The villain of The Sandman is creepy, terrifying and taps into the fear I had of the Sandman legend I was told about as a child. It made me want to hide under the duvet more than once. Lars Kepler are at the top of their game in producing fast-paced novels with unpredictable twists and unforgettable, complex characters.

Oh yes but keep the lights on after dark!

Up on my blog today is my review for Freckles by @official_ceceliaahern
My 4th book in my readathon to fundraise for @dystoniauk and spread awareness of dystonia is Autumn Crush by @themillyjohnson who never fails to make me chuckle and then sob.
Book 3 of the #DystoniaAroundTheWorld challenge Wish You were Here by @jodipicoult
It's #ReadABookDay and here's afew on my TBR list I'm hoping to read for my #DystoniaAroundTheWorld challenge including those by @themillyjohnson @official_ceceliaahern @paigetoonauthor and @kenyahunt
Coffee or hot chocolate and med time in #DystoniaDay2021 conference. Brill morning with Dr Morgante and Prof Edwards @dystoniaeurope @DystoniaUK #dystoniaawareness #dystoniawarrior #dopaminedeficient #doparesponsivedystonia #hotchocolate #coffeebreak #spoonielife
Watching the #DystoniaDay2021 conference with @dystoniaeurope for up todate information on #dystonia

Up on my blog today is my review for Freckles by @official_ceceliaahern
My 4th book in my readathon to fundraise for @dystoniauk and spread awareness of dystonia is Autumn Crush by @themillyjohnson who never fails to make me chuckle and then sob.
Book 3 of the #DystoniaAroundTheWorld challenge Wish You were Here by @jodipicoult
It's #ReadABookDay and here's afew on my TBR list I'm hoping to read for my #DystoniaAroundTheWorld challenge including those by @themillyjohnson @official_ceceliaahern @paigetoonauthor and @kenyahunt
Coffee or hot chocolate and med time in #DystoniaDay2021 conference. Brill morning with Dr Morgante and Prof Edwards @dystoniaeurope @DystoniaUK #dystoniaawareness #dystoniawarrior #dopaminedeficient #doparesponsivedystonia #hotchocolate #coffeebreak #spoonielife
Watching the #DystoniaDay2021 conference with @dystoniaeurope for up todate information on #dystonia
Follow From Under the Duvet on WordPress.com
Loading Comments...